My husband and I were watching The Handmaid’s Tale this past weekend, and we were struck by one of the things that June says to Moira when it seemed like Moira has given up and accepted her life as a prisoner and whore. June pretty much says, don’t let the bastards drag you down. Keep your shit together and keep moving. My husband and I were both feeling pretty defeated by some ‘bastards’ in our life, and this line hit home with us. In fact, it resonated with us so much that I ended up cutting it out on some window cling through Cricut and we put it on our bathroom mirror. 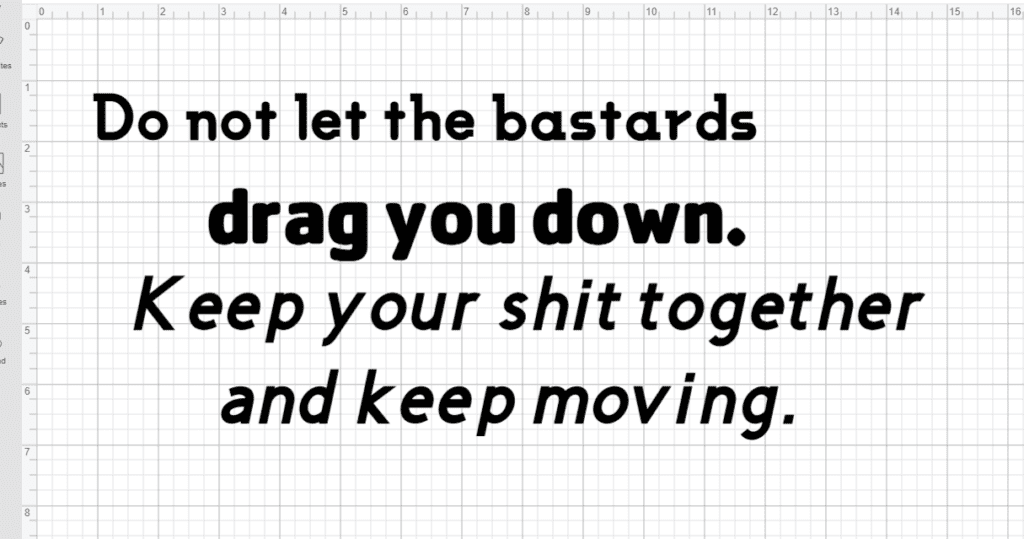 Contents show
The Biggest Bastards Are In Our Work Life
My Husband Works In An Office
I Work Online, Which Doesn’t Exclude Me From Dealing With Other People
Who Is Dragging You Down?

The Biggest Bastards Are In Our Work Life

In the show, June is talking about the people who are controlling them and forcing them to do what they don’t want to do. I won’t spoil anything in case you haven’t watched it, but let’s just say that they are not supposed to have any freedom in their life.

June is talking about not giving up and giving in. She’s talking about keeping her mind together and staying strong so that eventually she can get out of there and live the life she wants to live.

While we obviously don’t have it anywhere near as bad as the people in The Handmaid’s Tale, we have some people who are dragging us down and trying to keep us stuck in a life that we don’t want to live in.

Co-workers, bosses, and other people in our lives are capable of messing with our minds, causing us to lose our shit, and keeping us stuck in a life we don’t want to live in if we let them.

My Husband Works In An Office

My husband is terrified that he will end up spending his life in a job that the hates.

He is a smart man and a hard worker, and his co-workers take advantage of that and pile up work on his plate that they should be doing. Then they do nothing all day long except sit in their offices and laugh and then go out for drinks to celebrate what they consider a day well done.

The problem is that they are higher up than he is, and if he refuses to do their job, it could cost him his job. And his life plan consists of his job for a certain amount of time.

So, he has two choices:

Don’t let the bastards drag you down. Keep your shit together and keep moving. This reminds my husband that while his co-workers may be trying to drag him down so that they can move higher up, he doesn’t need to let them stop him from his dreams. He’s strong. He can keep his shit together, do what he needs to do at work in a positive frame of mind, and then put a high amount of energy, time, and focus towards his life vision in his free time.

I Work Online, Which Doesn’t Exclude Me From Dealing With Other People

I have had a lot of success as a freelance writer and blogger over the years, but often that success is threatened or squashed by people who have control over my earnings.

For instance, I dedicated two years of my life to one client. He paid me well, but I had no time to write for myself or anyone else. One day, he stopped working with me. There was no word that it was going to happen. He had no contact with me of any kind. And when he disappeared, my income disappeared as well.

Since then, I’ve put a lot of work into building up my sites and creating some income. A lot of my income comes from promoting products I have tried and love. So, I’m an affiliate with many companies. But that means I have to work with some of the most frustrating affiliate managers around.

One of them has always been very condescending and requires a lot of ego stroking just to do anything. This has been going on for years. The problem is that he controls whether or not I can make money through the affiliate program.

I have almost given up a few times over the years because of this guy. In fact, this guy has put me through so much stress over the past few months that I’ve made myself physically sick over it. I’ve let him drag me down and I have had a hard time keeping my shit together!

Just thinking about all of the things that he has done to bring me down gives me a pain in my side.

I know that if I let him, he would drag me down and keep me stuck doing things that I don’t want to do because they are WAY less frustrating than what he is putting me through. I have lost ALL respect for this person and consider him an egotistical jerk who doesn’t give a crap about the very people he is supposed to be working with, and that’s not a good thing when it comes to working with or for someone. It makes it very hard to put in the effort when you are in that state of mind.

Don’t let the bastards drag you down. Keep your shit together and keep moving. This reminds me that even though some affiliate managers and people online are completely in it for themselves and have no problem being deceitful and cruel, I don’t need to let their arrogance and lack of compassion drag me down. I need to keep it together, not let them affect how I think about myself and what I’m willing to do, and then keep moving forward towards the vision I have laid out for myself.

Who Is Dragging You Down?

Who is trying to drag you down and keep you stuck in a place you don’t want to be?

Who is making you lose your shit?

This affirmation is working for me. I look at it every time I start to think about the people who are frustrating or angering me and I’m reminded to keep my shit together and just do what I need to do.

Don’t let the bastards drag you down. Keep your shit together and keep moving.