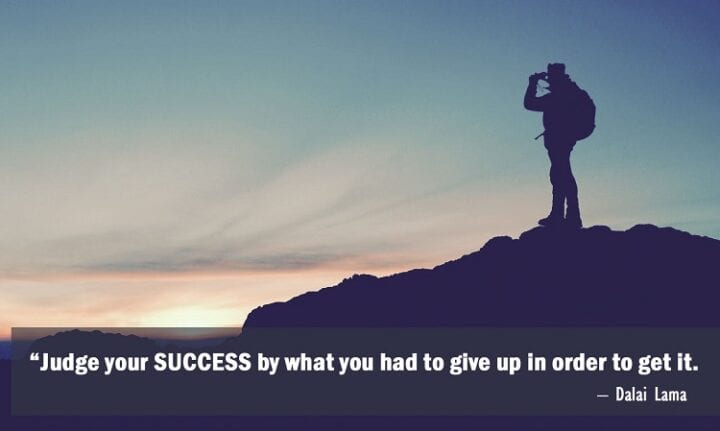 Success starts by having the right set of attitudes – a mindset. When you’re struggling to achieve it, a bit of inspiration can make a huge difference. Inspirational and motivational quotes have an amazing ability to influence us to work harder and endure longer to attain our goals.

If you feel like giving up on your dreams or goals in life, reading and reflecting on these inspiring quotes and sayings about success will help you continue until you finally become successful.

1. “Judge your success by what you had to give up in order to get it.” – Dalai Lama

2. “Success is not the key to happiness. Happiness is the key to success. If you love what you are doing, you will be successful.” – Herman Cain

3. “Success means doing the best we can with what we have. Success is the doing, not the getting; in the trying, not the triumph. Success is a personal standard, reaching for the highest that is in us, becoming all that we can be.”– Zig Ziglar

4. “Success is going from failure to failure without losing enthusiasm.” – Winston Churchill

7. “The successful man is the one who finds out what is the matter with his business before his competitors do.” – Roy L. Smith

9. “Success is not measured by what you accomplish, but by the opposition you have encountered, and the courage with which you have maintained the struggle against overwhelming odds.” – Orison Swett Marden

11. “Keep on going, and the chances are that you will stumble on something, perhaps when you are least expecting it. I never heard of anyone ever stumbling on something sitting down.” – Charles F. Kettering

12. “To succeed in life, you need two things: ignorance and confidence.” – Mark Twain

13. “You have to learn the rules of the game. And then you have to play better than anyone else.” – Albert Einstein

15. “Success means having the courage, the determination, and the will to become the person you believe you were meant to be.” – George Sheehan

16. “The secret of success in life is for a man to be ready for his opportunity when it comes.” – Benjamin Disraeli

18. “For success, attitude is equally as important as ability.” – Harry F. Banks

20. “People who succeed have momentum. The more they succeed, the more they want to succeed, and the more they find a way to succeed. Similarly, when someone is failing, the tendency is to get on a downward spiral that can even become a self-fulfilling prophecy.” – Tony Robbins

21. “Nothing in the world can take the place of perseverance. Talent will not; nothing is more common than unsuccessful people with talent. Genius will not; unrewarded genius is almost legendary. Education will not; the world is full of educated derelicts. Perseverance and determination alone are omnipotent.” – Calvin Coolidge

22. “You Learn More From Failure Than From Success. Don’t Let It Stop You. Failure Builds Character.”- Unknown

23. “If You Are Working On Something That You Really Care About, You Don’t Have To Be Pushed. The Vision Pulls You.”- Steve Jobs

24. “People Who Are Crazy Enough To Think They Can Change The World, Are The Ones Who Do.”- Rob Siltanen

25. “Don’t Let Yesterday Take Up Too Much Of Today.” -Will Rogers

27. “Entrepreneurs Are Great At Dealing With Uncertainty And Also Very Good At Minimizing Risk. That’s The Classic Entrepreneur.”- Mohnish Pabrai

28. “Failure Will Never Overtake Me If My Determination To Succeed Is Strong Enough.”- Og Mandino

29. “We May Encounter Many Defeats But We Must Not Be Defeated.”- Maya Angelou

30. “The Man Who Has Confidence In Himself Gains The Confidence Of Others.”- Hasidic Proverb

34. “Success is largely a matter of holding on after others have let go.”– Unknown

35. “Success seems to be connected with action. Successful people keep moving. They make mistakes, but they don’t quit.” – Conrad Hilton

36. “Keep away from people who try to belittle your ambitions. Small people always do that, but the really great make you feel that you, too, can become great.” – Mark Twain

37. “The difference between a successful person and others is not a lack of strength, not a lack of knowledge, but rather a lack of will.” – Vince Lombardi

38. “Success is how high you bounce when you hit bottom.”– George S. Patton

39. “Don’t wait until everything is just right. It will never be perfect. There will always be challenges, obstacles and less than perfect conditions. So what. Get started now. With each step you take, you will grow stronger and stronger, more and more skilled, more and more self-confident and more and more successful.” – Mark Victor Hansen

As you aim to achieve your goals in life, feel free to get a dose of inspiration and motivation from the quotes above. Choose the ones which are more applicable to your life. There’s no guarantee that you can be successful. However, starting and trying can already be considered a success. Remember that when you continue making little successes, they become full. And no matter how little these successes are, when they become full, you will become SUCCESSFUL.