1. Why Am I Finding Different Prices For The Quest All Access Pass?

I bought the Quest All Access Pass as soon as it came out, so it was $795 USD. Then, a few months later they dropped the price by a few hundred.

So, depending on whose article or review you are reading, you will be reading about the price that they bought the Quest All Access Pass for.

The only way to know what the cost or discount would be for you is to go to the information page and check the price at the bottom. You can quickly get to the price on the page by clicking on the ‘Enroll Now’ button on the top menu bar and then scrolling down just a touch.

2. Why Do Some People Say Certain Courses Are Included And Others Say They Are Not?

Again, this has to do with the change that Mindvalley made to the Quest All Access Pass. When it first rolled out, almost all the courses were included in the pass, except for Wildfit and Lifebook. With the price reduction, they also took away courses like Unlimited Abundance and The Yoga Quest.

They still have a ton of courses and quests (including upcoming quests), but they definitely took a couple of courses away when they dropped the price of the pass. So, depending on whose review or article you are reading, you will see what they got with the pass.

3. What About The $87 Offer For The Quest All Access Pass?

When searching for the Quest All Access Pass on Google, there is one place that is offering the pass at $87. I’m not going to link to the page because it’s pure crap in my opinion.

This doesn’t look like someone affiliated with Mindvalley in any way. It looks like they may have bought the Quest All Access Pass for themselves with the plan to download the quests into files and then sell copies of those files for their own pockets. But I can’t be sure exactly how they are doing it. That’s just my guess.

The disclaimer on the site that offers the Quest All Access Pass programs for ‘cheap’ is as follows: 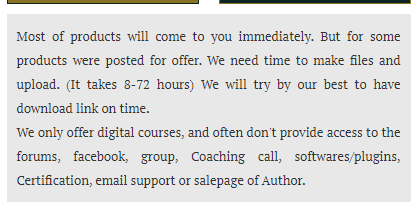 First off, it’s not good English, so that screams spammy and scammy to me.

Also, they say that you don’t get access to the Mindvalley dashboard, or the tribes, or support, or certifications, or anything else that actually has to do with Mindvalley. It looks like you are just getting downloaded versions of the quests in some way, but they are not totally clear about it.

Also, you don’t get access to things that complement the quests and provide value, such as the tribes.

Plus, I think it’s illegal to get these courses in this way. At least, it should be! The creators of the quests didn’t put all the effort into creating these quests for others to download and sell. They created them for Mindvalley, which is where you are supposed to be buying them from.

Every quest in the Quest All Access Pass comes with a community in a Facebook group. Mindvalley calls the people inside these groups your tribe for the quest.

The way I see it is that these are your classmates. They are there to help you learn, support you, and teach you as you go along. They are valuable to the quests in my opinion. But, it’s not necessary to join those tribes or even participate in them.

I think some people don’t want to participate in the Facebook tribe and found it annoying, and that’s probably why they removed that field from the quests.

I’ll just say that you can find out a lot about the quest and the information in it through other tribe members. Even if you don’t say anything, just reading posts can help you better absorb the material in the quests and understand what’s going on. In short, I do recommend joining the Facebook group for each quest you take with Mindvalley.