Your harsh inner critic thinks it has a purpose. It’s trying to protect you from danger, embarrassment, and mistakes. It’s trying to motivate you to do the right thing and avoid doing the wrong thing. But, in reality, all it’s doing is making you feel miserable and holding you back from the life that you want. It’s keeping you from growing and learning. It’s keeping you from putting yourself out there and trying new things. It can help you see where you’ve gone wrong, but it’s not helping you to move forward in a positive and helpful way. So, when your harsh and unhelpful inner critic decides to speak up, let it have its say and then use one of the following affirmations to quiet it down so that you can move forward in a positive way. 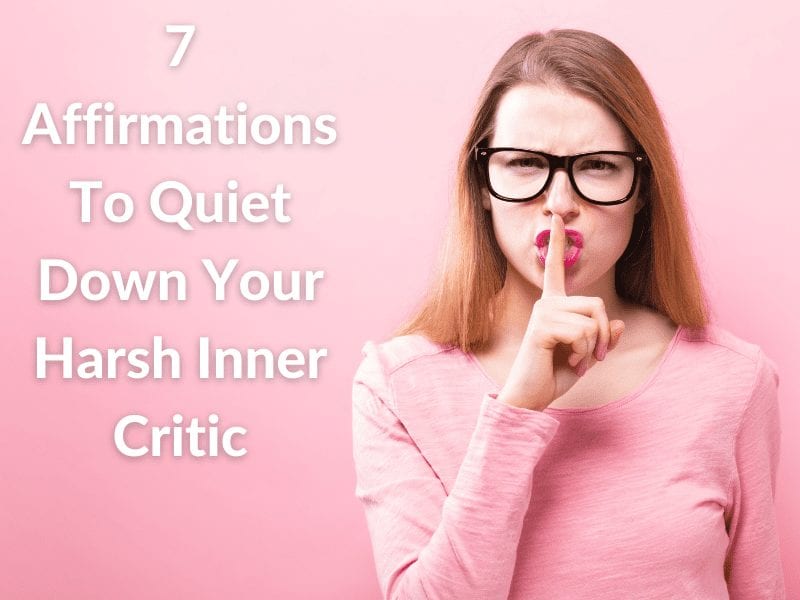 1. I Love Myself At All Times

This affirmation is a must if you want to quiet down your inner critic.

Real love isn’t critical – it’s accepting. When you practice self-love, you are more accepting of yourself and your inner critic comes out much less.

You wouldn’t be a loud, annoying, mean critic to your best friend, would you? This affirmation will help you to step out of your head and see yourself as an individual who deserves to be treated with compassion rather than harsh criticism.

The idea is not to separate yourself into two people but, instead, to see yourself in a way that other people would see you and then treat yourself as you want them to treat you.

And, in reality, it’s nice to be your best friend. When you are your biggest supporter, big things can happen because you will be able to encourage yourself to take risks, keep trying, and pick yourself up when you fall down.

3. I Always Learn From My Mistakes

It’s easy to replay a mistake over and over in your head and let your inner critic yell at you about it, but it does nothing good for you. Finding the lesson in the mistake will help expand your awareness and make sure you go forward with more confidence.

For instance, when I first started writing online, I submitted my articles to many different sites. I remember sending one article to a popular website and receiving a very hurtful response from them telling me that the article was really bad. They were unusually harsh on me (I haven’t come across too many people like them since), and I was quick to let my inner critic beat me up verbally. I almost quit trying right then and there. But then I realized that I was relatively new at this and maybe my article did suck. It became a motivator to always improve my writing. While they were harsh, I took something from it and moved on to become a better writer.

This affirmation to quiet down your inner critic is important. It’s going to help you at all times in your life. Whether you fail, are having a hard time doing what you want to do, or are receiving a lot of hate from other people, this affirmation can help you remind yourself that you are doing your best and there is nothing else you can do.

For instance, I see a lot of vloggers who are criticized for everything they do. It doesn’t matter if they are making a mistake or just being themselves, they are criticized. I have seen entire forums dedicated to hating on these vloggers and breaking everything they do apart. This affirmation is something these vloggers need to repeat to themselves often if they want to overcome the hate that unleashes their inner critic. They need to remind themselves that they are doing the best they can and aren’t perfect, and there is no reason for them to beat themselves up for other people’s opinions.

Our inner critique often comes out when we compare ourselves to other people.

It’s very important to stop comparing yourself to other people and recognize that you are unique and have your own path in life to follow.

Comparison holds you back and can even keep you stuck in life.

Embracing the fact that you are unique can help you to celebrate yourself and your accomplishments, despite how they compare to others.

Despite your best intentions, you are not going to go through life without making mistakes. There’s no way that can happen.

You are not perfect.

Your inner critic needs to know that.

When your inner critic recognizes that you are not perfect, it will let up with its harsh words.

Use this affirmation often and add a little message at the end if you want, such as ‘I am not perfect, but I always do the best I can and that’s good enough!’

7. I Love YOU, Inner Critic

This is a variation of the first affirmation to quiet down your harsh inner critic, and it’s important!

This is another way of showing self-love but feels as though you are showing a hater love instead.

Can you imagine telling someone else, who is harshly criticizing you, that you love them? Imagine their face and their reaction. They will likely either soften their criticism a bit, leave the situation, or feel horrible for how they’ve talked to you and apologize. This is what your inner critic will do too.