When I was young, I lied all the time. I lied to my parents, my friends, my teachers, and even people I didn’t know! Now, I don’t lie. I tell the truth because it feels better, it helps me keep my relationships strong, and it helps me be clear about who I am and what I want. Lying has caused so much pain in my past that I wouldn’t do it even if I could. I follow the rule that if I have nothing nice to say, I don’t say it at all. How about you? Do you need to stop lying? Following are 7 affirmations to use that will help you remember that lying is not good and being honest is always the option. 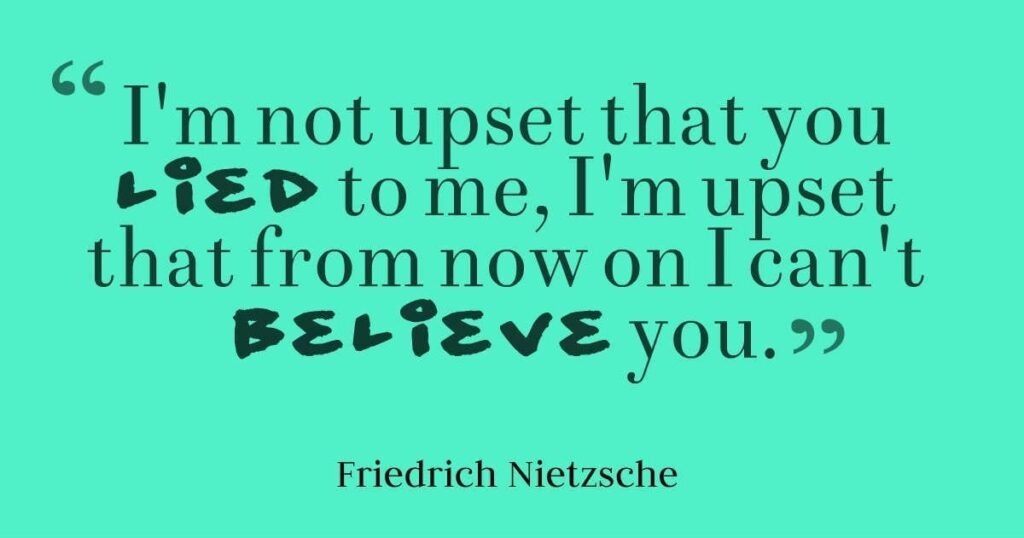 You may be able to outsmart some people some of the time, but for the most part, people know when you are lying. Even if you have the words perfect, they can see it in your body language or, worse, they catch you in the lie.

After a few lies, people start to lose trust in you. And after constant lies, people view you through very a very negative lens, and that affects your relationship in a really negative way.

For example, my friend’s father is constantly lying to her. He’s done it for years, so she figures it’s a habit that he’s in. But, because she’s caught him in so many lies, she no longer trusts her own father. Plus she has lost a ton of respect for him. She doesn’t look up to him or hold him in high regard because she doesn’t like who he is and doesn’t want to be someone like him.

You don’t want to lose respect and trust in your relationships. When people judge you poorly and think badly about you, they are not going to trust you, depend on you, or confide in you. Moreover, if they don’t trust you, they are not going to communicate with you and share their lives with you in a way that helps you maintain a close relationship.

2. I Want People To Be There When I Need Them, So I Don’t Lie

When you lie, people have a hard time believing you. That’s not good for you when you need other people to help you out.

For instance, every time my friend’s dad says something, she doesn’t believe it. Even when he complained about stomach pain, which turned out to be something serious, she had a hard time believing that something was really wrong and didn’t go check on him to see how he was doing.

The problem is that you need other people in your life. They can help you out of sticky messes and offer support when you need it. If you are prone to lying, then you are going to have a hard time convincing other people that you really do need help. That could cause some serious problems in your life and leave you stranded without anyone on your side.

3. Lying Could Ruin My Relationships

Lying doesn’t just hurt your relationships, it ruins them.

Think of an ex who lied to you and made you suffer because of those lies. I’m willing to bet you don’t have a relationship with them anymore, and, if you do, it’s nothing near as close as it once was.

I have a friend who was constantly lied to by her friend. Her friend didn’t know that she knew about the lying, but she was hearing the truth from mutual friends who also didn’t know that she was being lied to. They just assumed she knew. Eventually, my friend ended their friendship because she felt like her friend didn’t respect her enough to be honest with her. That was a huge blow to her friend, who she had been friends with for 20 years. She did everything she could to win back my friend, but the lying had put too big of a wedge in their relationship to repair it.

If you love the person you are in a relationship with – or even just like them, then don’t lie to them. You could lose their friendship or companionship forever.

Nobody wants to be in a relationship with someone who lies to them. Stop lying so you don’t run the risk of ruining your relationships.

4. I Live With Love And Compassion

Lying isn’t about love and compassion, despite what some people think. It’s about mistrust and selfishness. It’s about making yourself feel better in some way. Usually, it’s about avoiding negative judgment and making things as comfortable as possible for yourself.

For instance, you may lie to someone about how happy you are because you don’t want them to think you are sad, depressed, or not doing well. I think this is probably the biggest lie being spread through Facebook. Everyone is trying to tell everyone else how amazing their life is when the truth is we all have ups and downs and everything is not always amazing.

By living with love, you can trust that other people care enough about you to accept your truth because true love is about acceptance.

Living with love and compassion also means that you don’t lead with harsh truths that hurt other people. But, instead, you keep your mouth shut if you have nothing to say, or you tell other people truth in a kind and constructive way instead of a harsh and hurtful way.

All relationships should be approached with love and compassion. It helps make them strong, valuable, and comfortable. So, stop lying and start telling the truth.

5. I Am Brave Enough To Be Honest

Be brave, stop lying, and let the world know your truth! It’s the only way that they will really understand who you are, what you want, and what you need.

Don’t worry about people losing respect for you when you are honest because, most times, people will respect you more when you are honest. They will feel more connected to you and admire the fact that you can tell it like it is instead of hiding behind some false mask.

6. I Enjoy Telling The Truth

Here’s the thing, when you tell the truth, you stop having all those inner conflicts about your lies. That is very enjoyable, trust me.

You also don’t need to keep track of your lies when you tell the truth, and that is also very enjoyable! It’s much more fun to talk to someone without having to remember to keep this story straight or that story straight.

And, when you tell the truth to people, you don’t end up letting something slip in later conversations, making everything really awkward and uncomfortable.

Also, you don’t have to worry about other people letting something slip! I remember one of my friend’s kids chiming in on a conversation that my friend and I were having, and it totally busted my friend for a lie that she had told me – about me. It was beyond awkward, and I still don’t fully believe her when she’s complimenting me.

It doesn’t feel good to lie. It’s hard to tell lies. So why do it?

Affirm to yourself that you enjoy telling the truth and it will feel much easier to stop lying and start being honest.

Often people lie because they want to be someone else, or they feel worthless on some level. They don’t want to be someone who failed at this or that. They want to be great, successful, a winner and killing it in life. So they lie and hope other people will believe that they are doing better than they are. And, in the process, they also lie to themselves.

When you pretend to be doing better than you are, you can’t fully acknowledge things that are going wrong.

For instance, if you tell people that your relationship with your spouse is great, even though it’s not, you might start to lie to yourself and pretend like it’s not that bad. Moreover, you are not able to get other people’s input on your unhealthy relationship, so you are not gaining any new insight into how bad it really is.

It’s much better to accept yourself and where you are now. When you do that, you can be honest about what’s happening and allow other people to give you advice that may help you move the needle and get unstuck.

We all fail, and we all have problems in our lives. It’s how we learn and grow.

Accept that you are where you are in life. But, don’t settle in unhappiness. Always strive to move the needle and become happier in life. With an honest view of what’s happening, you can see what needs to be changed and make the right choices to do so.

Those 7 Affirmations To Stop Lying Again

To recap, the 7 affirmations to stop lying are:

Which affirmations inspire you to stop lying and start being honest? Repeat them often and get yourself into a mindset where lying is not something you want to do anymore. You will be amazed at how much easier it will be to tell the truth!