Albert Einstein (14 March 1879 – 18 April 1955) was a German-born theoretical physicist who developed the theory of general relativity, effecting a revolution in physics. For this achievement, Einstein is often regarded as the father of modern physics and one of the most prolific intellects in human history.

He received the 1921 Nobel Prize in Physics “for his services to Theoretical Physics, and especially for his discovery of the law of the photoelectric effect”. The latter was pivotal in establishing quantum theory.

Einstein published more than 300 scientific papers along with over 150 non-scientific works. His great intellectual achievements and originality have made the word “Einstein” synonymous with genius.

If you want to become smarter, read or watch something about Albert Einstein quotes.

1. If you can’t explain it simply, you don’t understand it well enough.

2. Learn from yesterday, live for today, hope for tomorrow. The important thing is not to stop questioning.

3. We cannot solve our problems with the same thinking we used when we created them.

4. Only two things are infinite, the universe and human stupidity, and I’m not sure about the former.

5. Logic will get you from A to B. Imagination will take you everywhere.

6. I have no special talent. I am only passionately curious.

8. Strive not to be a success, but rather to be of value.

9. Education is what remains after one has forgotten what one has learned in school.

10. Anyone who has never made a mistake has never tried anything new.

11. The only source of knowledge is experience.

12. Only a life lived for others is a life worthwhile.

13. Joy in looking and comprehending is nature’s most beautiful gift.

14. Once we accept our limits, we go beyond them.

16. The only reason for time is so that everything doesn’t happen at once.

17. All that is valuable in human society depends upon the opportunity for development accorded the individual.

18. The important thing is not to stop questioning. Curiosity has its own reason for existing.

19. The environment is everything that isn’t me.

20. No amount of experimentation can ever prove me right; a single experiment can prove me wrong.

21. Never do anything against conscience even if the state demands it.

22. Common sense is the collection of prejudices acquired by age eighteen.

23. I believe that a simple and unassuming manner of life is best for everyone, best both for the body and the mind.

24. The distinction between the past, present and future is only a stubbornly persistent illusion

25. Everyone should be respected as an individual, but no one idolized.

26. In matters of truth and justice, there is no difference between large and small problems, for issues concerning the treatment of people are all the same.

27. Gravitation is not responsible for people falling in love.

29. The whole of science is nothing more than a refinement of everyday thinking.

30. Most people say that it is the intellect which makes a great scientist. They are wrong: it is character.

32. Politics is for the present, but an equation is for eternity.

33. Imagination is more important than knowledge.

34. The gift of fantasy has meant more to me than my talent for absorbing positive knowledge.

35. We cannot despair of humanity, since we ourselves are human beings.

36. I never think of the future – it comes soon enough.

37. When the solution is simple, God is answering.

38. The hardest thing to understand in the world is the income tax.

39. The only real valuable thing is intuition.

40. Anyone who doesn’t take truth seriously in small matters cannot be trusted in large ones either.

41. Anger dwells only in the bosom of fools.

42. I want to know all Gods thoughts; all the rest are just details.

43. Information is not knowledge.

44. It is only to the individual that a soul is given.

45. Human beings must have action; and they will make it if they cannot find it.

I think these quotes reflect on how we should approach life and why Albert Einstein’s quotes are good for us. It’s saying that everything you see around you comes from stars, so if we learn more about them, we can increase our knowledge of ourselves and the world around us.

However, one must always continue learning because even Einstein was wrong about some things (e.g., gravity is not permeating black holes, they emit radiation). I think Einstein was so smart because he had the most curiosity of anyone in the world and that’s why he achieved so much.

Einstein: His Life and Universe by Isaacson, Walter (2007) Hardcover

Who Was Albert Einstein? 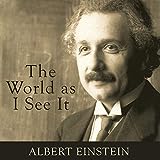 The World as I See It

100 Motivational Quotes to Inspire You to Achieve Success in Life