How much have you lost or will you lose by not taking chances? Think about that. All the times you say no or hide in fear will be moments that you will never know what you could have gained if you had just taken a chance. If you don’t want to live with that regret, then here are some affirmations that can help you take more chances.

Contents show
These Affirmations Will Encourage You To Take More Chances
1. I Take Chances To Get What I Want
2. If I Don’t Take This Chance Someone Else Will
3. Things Usually Don’t Turn Out As Bad As I Imagine
4. I Want More Out Of Life
5. I’m A Leader, Not A Follower
6. I May Not Get A Second Chance
7. The Best Things In Life Come After Taking A Chance

These Affirmations Will Encourage You To Take More Chances 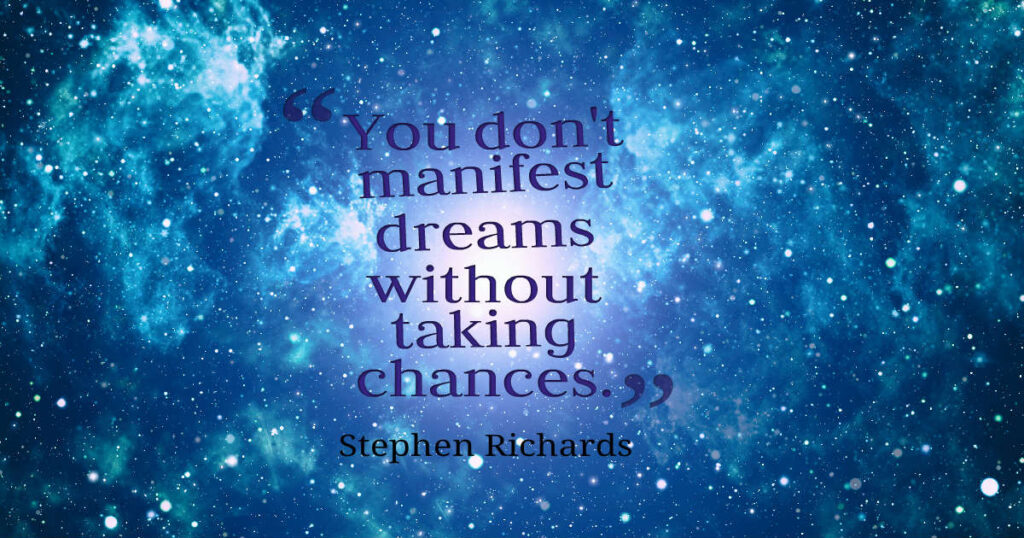 1. I Take Chances To Get What I Want

You want a lot of things in life, some small and some big. Sometimes you have to take chances in order to get what you want. For instance, asking someone out is taking a chance on rejection, but if you don’t ask someone out, then you won’t get a date with them – guaranteed.

Use this affirmation even when focused on little things, such as buying a lottery ticket, phoning up for pizza, or asking a friend for feedback. Each time you have to do something to get what you want – that may or may not work out (we’ve all had the wrong pizza delivered to us!) – you are taking a chance. Even if it’s a small thing.

Therefore, saying this affirmation before you act on anything will help it become a belief, and soon you will be taking chances for bigger things, like job interviews, business deals, and more because you will want things, and you will understand that you need to take chances to get them.

2. If I Don’t Take This Chance Someone Else Will

This is a great affirmation to get your butt in gear and take chances! It’s a truth that needs to become a belief in your life in order to motivate you to just try.

The fact is that someone else will be willing to take a chance if you don’t. And they can get what you want, what you dream about, and what you need.

If you see an opportunity to create something or get something, take it. If you don’t, someone else will.

3.  Things Usually Don’t Turn Out As Bad As I Imagine

Often people won’t take chances because they are scared things will end horribly. But, has anything ever worked out as horribly as you imagined? Did your life end? Did you lose it all? Did you lose all will to live? Probably not.

Things rarely turn out as bad as you imagine them too. But this is real life and it’s important to admit that sometimes they do. For instance, taking a chance and going to the doctor to find out why you are experiencing certain symptoms may result in a diagnosis you were scared of, such as cancer.

But 99% of the time things don’t work out as bad as you imagine. Sometimes they even work out much better.

Are you willing to not take a chance because there’s a 1% chance things may go as you imagine? There’s still a 99% chance that things won’t be as bad as you think, and you could come away with something you want or need.

Try not to overthink. Overthinking makes you second guess your intuition; thus keeping you from taking chances you’ll likely succeed in.

You need to take chances and put yourself out there in order to get more out of life. Your future success won’t come out of anywhere. It will come out of the chances you take.

Moreover, some of the best opportunities only come when we take a chance. For instance, a guy I know was working at a job he liked but didn’t love. He was making a lot of money and had a lot of perks in his position. He didn’t believe he could get a better job, but he took a chance and applied for a job that he saw in an ad. Turns out that job paid twice what he was making and involved travel, which was something he really wanted to do. He got the job and has been getting so much more out of life, including a love relationship with someone he met while traveling!

Whenever you find yourself on the side of the majority, it is time to pause and reflect. – Mark Twain

Leaders make decisions and take chances, followers don’t. They follow. They do what their leaders say is safe. They don’t step out of the box and see what could happen – they wait for someone else to do that.

If you want to be a follower, that’s fine.

But, if you want to take control over your own life and carve your own path, you are going to have to take chances. When you are really struggling with taking a chance, use the affirmation ‘I’m a leader, not a follower’ to help you make the right choice.

“No one ever became a success without taking chances” – Estée Lauder #MondayMotivation pic.twitter.com/4jAyspz9Cs

6. I May Not Get A Second Chance

The fact is that you may not get a second chance. If you don’t take it now, the opportunity may die out, no matter how badly you want it back.

This lesson is a hard one to learn. Believe me, you want to learn it as little as possible.

So saying this affirmation every time you have a chance to do something, and letting it sink into your belief system that you may not get another chance, is important to avoid a lot of heartache and regret.

7. The Best Things In Life Come After Taking A Chance

Nothing great will ever fall into your lap unless you take a chance.