When someone pisses you off, it’s very easy to fly off the handle and ruin your day. Essentially, that’s just letting them take control of your day with their behavior or words, and they don’t get that kind of control over your life.

Instead of getting angry or being passive-aggressive, go within and use the affirmations to help you see the situation in a different light. 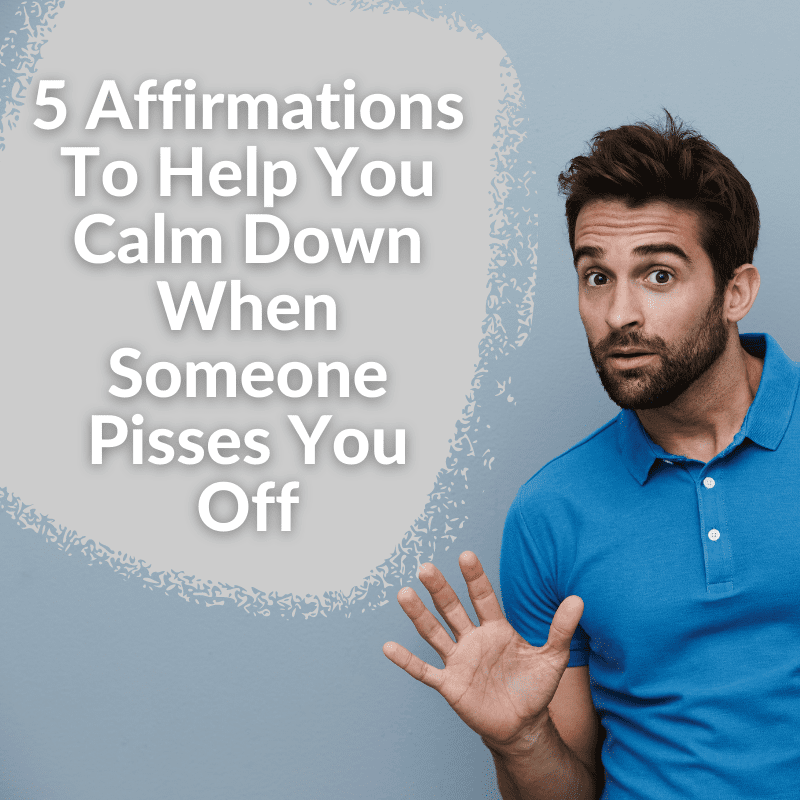 Contents show
1. Many People Are Miserable
2. I Don’t Need To Find The Good In Everyone
3. I Will Not Let Someone Ruin My Day
4. People Don’t Have To Act How I Want Them To
5. I’m Moving On To Something Better Now

1. Many People Are Miserable

This is a really good affirmation to say when someone pisses you off. It reminds you that there are a lot of unhappy people out there, for a wide variety of reasons, and they are just looking for someone to piss off. They are waiting until someone looks their way or acknowledges them so that they can unload their crap onto someone else.

Some people are just having a bad day.

Some people are having a bad year or decade.

Some people are having a bad life.

But if they are miserable, they are looking to bait you into their trap of misery.

For instance, there are some people who are ‘frauditors’. They call themselves auditors and pretend like they are trying to audit the police and government employees to make sure they are doing what they should be doing, but, instead, they just harass both police and civilians alike. They are miserable. They have a negative view of the world. And they want other people to be miserable. So, they wait until someone gives them any kind of acknowledgment and then they unload all their misery onto that person for as long as the person will stand there.

Many people are downright miserable. And those people want to drag everyone down to their level. Knowing this can help you avoid their bait and trap and move on without feeling personally attacked in any way.

2. I Don’t Need To Find The Good In Everyone

Trying to deal with someone who pisses you off in a calm and rational manner might seem like a good idea. A lot of people recommend talking to people who piss you off to see if you can come to a resolution. It may seem like you can find that spark of goodness and morality in them that allows them to calm down and interact with you in a better way. But the truth is that you are not always going to find good in everyone. You are not always going to come to a resolution. And you don’t need to.

If you try to deal with someone calmly and they keep pissing you off, it’s alright to get yourself out of the situation. You don’t need to put up with it. You don’t need to try and make them happier. You need to look after yourself.

3. I Will Not Let Someone Ruin My Day

First and foremost, affirm to yourself that no matter how crappy their day is, you will not let them ruin your day. You only have so many days on this earth and letting someone else piss you off and ruin one of them is not going to happen in your world.

You can always choose how you feel, no matter what is happening, so make the choice to feel how you want to feel despite how this person is acting or talking.

4. People Don’t Have To Act How I Want Them To

Sometimes someone is dealing with a lot – death, loss of a job, or health issues – and they are not in any mood to act in any other way than how they are feeling.

By affirming to yourself that others don’t have to act how you want them to, you will stop wanting them to be different and let go of a lot of resistance and anger.

The list goes on and on. Accepting that not everyone is going to be a decent human being who is considerate, compassionate, and kind is going to help you be a lot less pissed off when you run into people who don’t think, act, or behave in a way you want them to.

5. I’m Moving On To Something Better Now

Another affirmation that can help you calm down when someone pisses you off is this one. You have the ability to quickly switch gears into a state of anger from happiness, so why not happiness from anger?

Acting ‘as if’ is a powerful tool that can help you switch into a state of being that you want to be in.

How do you want to feel? Act as if you already do feel that way and your thoughts and emotions will follow suit.