A good friend is someone who is there for you through good and bad. They support you, love you, and have your best interest at heart. But sometimes even the strongest friendships go downhill. Not every friendship is meant to last, and if your friend is no longer a good friend, then it may be time to cut ties and create another friendship that supports you better. 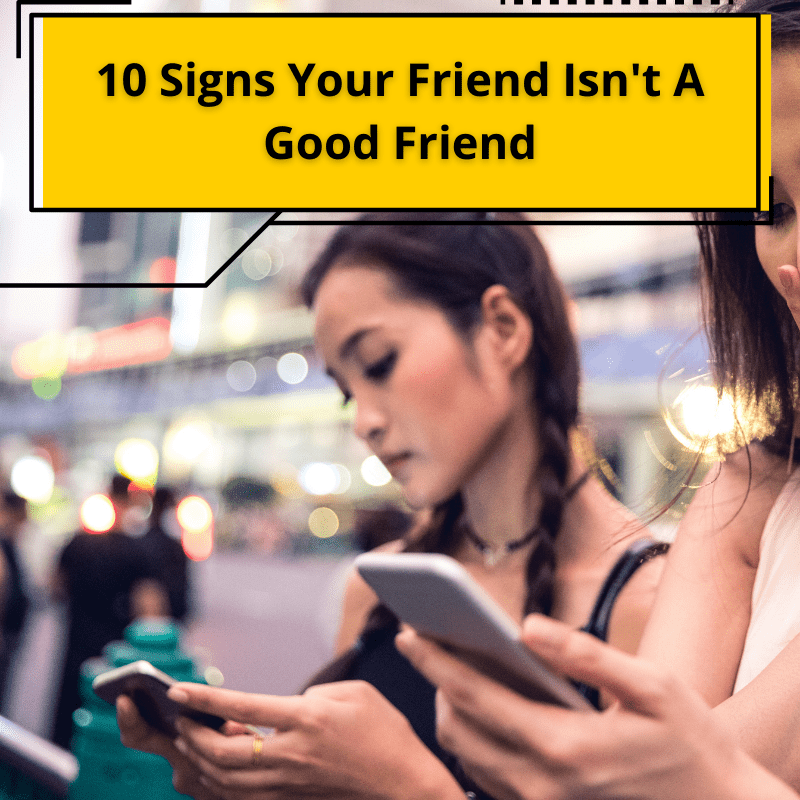 Contents show
1. They Are Not There For You In The Bad Times
2. They Support Your Destructive Habits
3. They Flirt With Someone You Like
4. They Make It All About Themselves
5. They Lie To You
6. They Make Fun Of You
7. They Take Advantage Of You
8. They Treat Your Poorly In Front Of Other People
9. They Choose Other Things And People Over You
10. You Feel Something Is Off

1. They Are Not There For You In The Bad Times

Ultimately, this is what friends are there for. They are there to support you, listen to you, and offer you as much help and guidance as they can. T

There are going to be times in life when we just have to drop our own schedule and show up for someone else who needs it, and we do that when it’s a really good friend.

A friend who disappears during a crisis isn’t a good friend.

2. They Support Your Destructive Habits

You may think a friend who doesn’t support you on occasion isn’t a good friend, but the opposite may be true.

For example, there is a woman in an abusive relationship. She has kids and those kids are also being abused and are seeing the abuse of their mom. Her good friend has done everything she can to get her out of that relationship to no avail, so she has finally had to stop supporting her excuses and rationale for staying with her husband. This woman thinks her friend isn’t a good friend because she’s no longer willing to listen to her excuses, but the opposite is exactly true. She’s such a good friend that she’s not willing to stand by and watch her get smacked around and, potentially, killed.

If you have a disruptive addiction, are in an abusive relationship, or are doing things that are damaging you or your life, a good friend is not going to cheer you on.

Think of it this way, only a bad friend would enjoy seeing you digging yourself deeper and deeper into something bad for you.

Whether you are in a relationship or just interested in someone, a good friend won’t make a move on that person. They wouldn’t want to hurt you or your feelings, so they will find someone else to flirt with. After all, there are a million fish in the sea.

4. They Make It All About Themselves

When you talk to them, they talk about themselves.

When you do something, you do what they want to do.

When you try to share your opinion, they tell you that you are wrong.

A good friend knows that the friendship is a mutual experience, not a one-sided experience, and will make time to listen to you and your point of view. They will be interested in your life and what is happening, what you want, what you need, and what your plans are.

A good friend has nothing to hide from you. They know that you accept them as they are, so they share things about themselves that they may not even share with other people.

Friends who lie to you either don’t respect you enough to tell you the truth or feel some sort of disconnection from you that causes them to lie.

When it comes to lying, you may want to consider something important. It could be they lie because they feel you are judgmental or opinionated and don’t want to share their viewpoints with you. In that case, you may be being the bad friend who is not accepting them as they.

In a friendship, there is always some friendly banter, but there’s a line that you don’t cross. If your friend is calling you fat, lazy, stupid, or something else that hurts your feelings, then they are being a bad friend. They are putting you down and making you feel bad, which is not something a good friend would do.

You may not be exactly like your friend, but neither of you should be purposely trying to make the other one feel bad. That’s a huge sign of a toxic friendship that shouldn’t be continued.

7. They Take Advantage Of You

A good friend may need you in their life sometimes, but they will not take advantage of you.

There are many ways a friend can take advantage of you, including:

8. They Treat Your Poorly In Front Of Other People

A friend who treats you like gold when you are alone, but treats you poorly in front of other people, is not a good friend.

There are many reasons they may do this, but none of them are good.

9. They Choose Other Things And People Over You

Sometimes a good friend can cancel plans with you or choose other things of importance over you, but it doesn’t happen often.

If you find that your friend often chooses other things and people over you, then that’s a sign that they are not a good friend. It’s an indication that when it comes to their priorities in life, you fall low on the totem pole.

For example, you have a date to hang out, they get a call from someone else, and they cancel your date and hang out with them instead – and this has happened multiple times.

Or your birthday is coming up and you talk about what you are going to do, and on the day in question, they choose to do something else instead. In fact, they often blow off your birthday.

10. You Feel Something Is Off

Your intuition knows more than you think. If you feel like something is off, but you are not seeing one of the signs that your friend isn’t a good friend, you may still want to pay attention to that intuition.

Or maybe you’ve caught them spilling your secrets to other people and, even though they swear it’s innocent, you can’t help but feel that they want you to look bad or negative in other people’s eyes.

There are lots of little signs that something is off in your friendship, and even if you are not actively seeing them, your intuition will catch them and give you that sensation that something just isn’t right.

Not all friendships are going to last forever. Sometimes you need to end a friendship and move on.